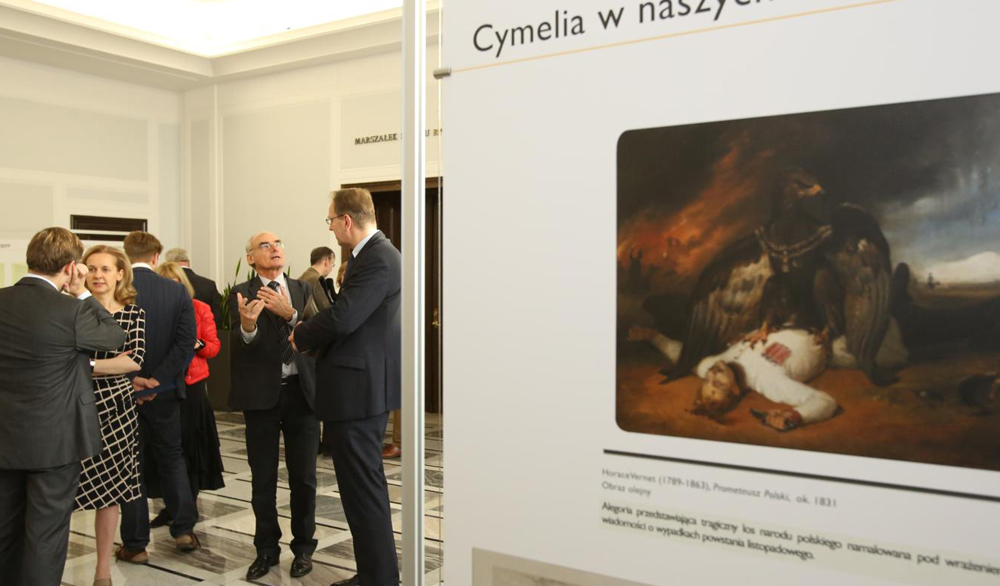 We invite you to rent the exhibition

The titular “Isle of Freedom” is the Polish Library in Paris, located on the Île Saint-Louis in the heart of the city — an oasis of independent Polish culture and political thought in the XIX and XX CE.

For almost 150 years, since 1838, during the time of the Partitions of Poland until today has the Library been a place of meetings and discussions for the Polish emigrants who created the Library’s valuable book collection, collected artworks and documents.

The exhibition tells the story of this unique place, presents its creators and showcases some of the most precious collection pieces.

The exhibition starts with a historical introduction about the participants of the so-called Great Emigration, who were members of the Polish Historical and Literary Society, and about their role in establishing the Polish Library in Paris. The next displays present pictures of the most precious collection pieces: manuscripts, artworks, maps and prints. Some of those pieces relate to prominent individuals who were connected to the Library, Adam Mickiewicz and Frederic Chopin among them.

Hence, the exhibition presents manuscripts of Mickiewicz, portraits of him and his family as well as memorabilia of Chopin: musical autographs, Chopin’s armchair and a lock of his hair. The displays present some of the collection’s most valuable pieces, for instance the resolution on the national colors and the deposition act of Tsar Nicholas I from 1831, sixteenth-century prints from Kraków’s publishing houses, a manuscript of Adam Mickiewicz’s Dziady (Forefather’s eve), first editions of Polish poets and authors who were published in exile, the first edition of Nicolaus Copernicus’s De revolutionibus, drawings by Cyprian Kamil Norwid, paintings by Olga Boznańska and Bolesław Biegus and many more pieces, all priceless examples of Polish culture.

The exhibition Isle of Freedom premiered in 2014 in the building of the Senate of the Republic of Poland. In the following year it was presented in the Royal Castle in Warsaw, where the opening was attended by President Bronisław Komorowski. In 2015 it could be seen at the University of Lódź. The exhibition was created by the Polish Historical and Literary Society and the Polish Library in Paris, in cooperation with the National Library of Poland in Warsaw.

Translated to English by Magdalena Wójcik